This hand-held transmitter has a compact, user-friendly design. Twelve large, square buttons take up the whole front of the transmitter, making it easy to operate. All the buttons are clearly labelled and have dedicated LEDs indicating active functions. The flexible software makes the transmitter suitable for a wide range of applications. 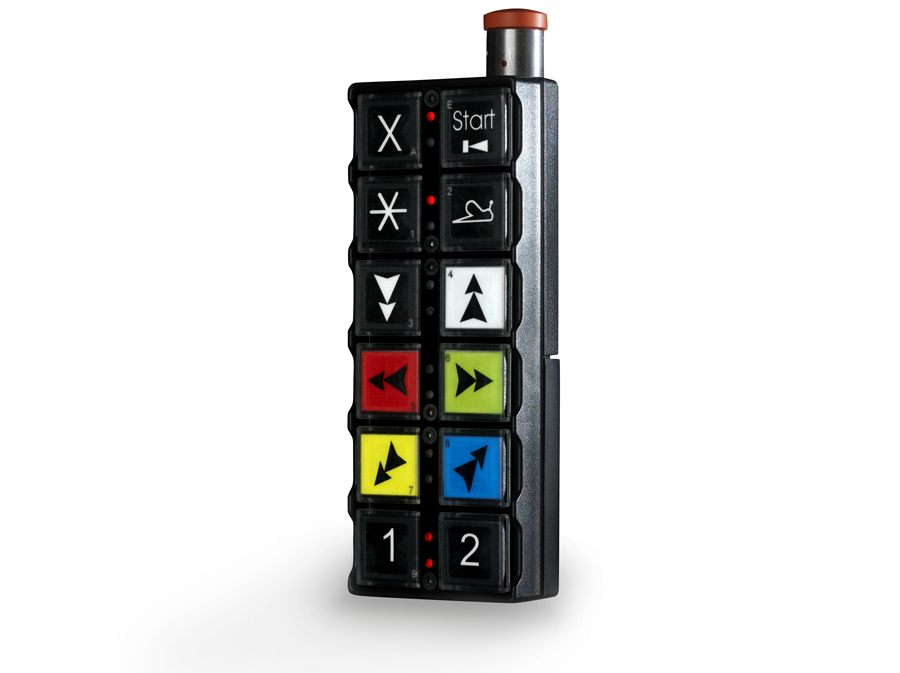 Comprehensive safety
The transmitter is equipped with a built-in start control, preventing start-up in the event of safety-critical errors. LED indicators and audible signals inform the user as to what has caused the error. The transmitter continuously sends information to the receiver using a digitally verified protocol unique to Datek. In the event of even the smallest error arising, the receiver will immediately (<0.5 seconds) revert to a safe stop mode.

Each Datek transmitter is assigned a unique ID code, ensuring that any given transmitter can only activate its own dedicated receiver. No other transmitter or product can ever activate a Datek system.

Durable and user-friendly
The transmitter has 12 large push buttons with interchangeable labels protected by transparent plastic caps. The caps keep the symbols in place and prevent them from becoming worn over time. The transmitter is supplied with customised labelling using the customer’s chosen text, symbols and colours.

The large buttons are easy to operate even when wearing gloves. They are also durable and have been tested for three million operations. The push buttons have a distinct tactile sensation in one or two speed steps. LEDs by each button indicate active functions and operating status.

Flexible and smart control
The transmitter can be configured from the keypad without any external tools or software. Frequency, shut-off time and momentary/locking functions are some of the features that can be reprogrammed with a few simple key presses.

Buttons for trolley selection, multi-function control and micro speed enable easy crane operations. With the multi-function feature, several motions and speed levels can be activated and run simultaneously from one single button. Releasing the button stops all operations. The micro button disables the second speed level on all motions.

On transmitters with single-step buttons, a Shift button changes the functionality of the buttons. This makes it possible to control 20 different digital functions, even though the transmitter is only equipped with 12 push buttons. The buttons either have momentary functions, which give a signal for only as long as you keep pressing, or a lock function. The LEDs indicate active functions.

Extended speed levels
It is possible to use extended speed levels when the transmitter is used for applications that have more than two speed steps. The button has two mechanical steps, but when it is held in its second step the speed is automatically increased further.

If the button is released to its first step, the transmitter maintains the speed. The transmitter can handle a maximum of four functions with up to seven speed levels.

Datek’s multiple operation ensures that only one transmitter at a time can have control of the receiver. Operators have to make an active choice to transfer the control, by either relinquishing control or taking control.

Long operation time
The interchangeable battery has a continuous operating time of up to 24 hours. The battery can be recharged in 2.5 hours using the accompanying battery charger. The charger can run on 12–24 VDC for mobile applications and 110/230 VAC for stationary ones.

Speak to one of our experts to learn
more about how we can help you.